Justice, Liberty And Freedom for All!
​
​RISE UP YOU
MIGHTY PEOPLE! 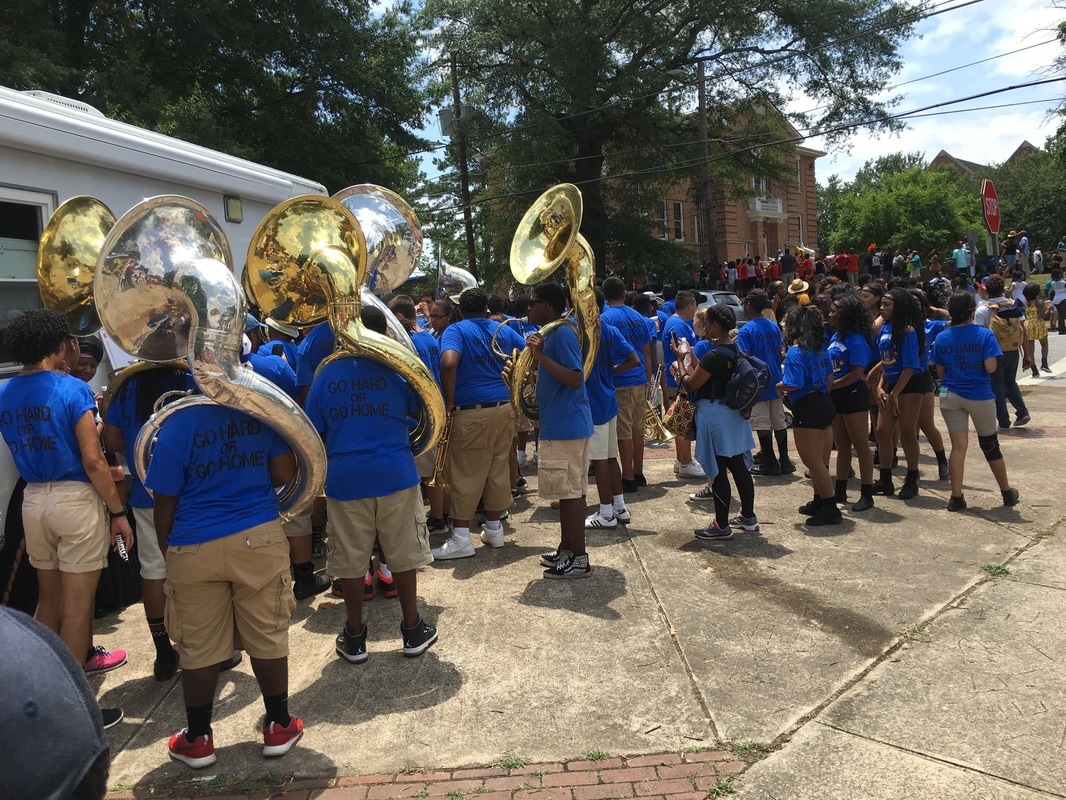 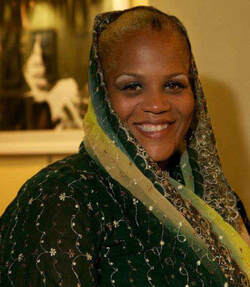 KHADIJAH ABDUR-RAHMAN
FULTON COUNTY COMMISSIONER DISTRICT 6 ​
​Khadijah Abdur-Rahman is the Fulton County Commissioner for District 6, popularly known as “The Mighty6” commission district. “Commissioner Khadijah,” a business owner and community advocate, was elected overwhelmingly by the people of Southwest Atlanta and the communities in South Fulton County in November 2020. She secured the seat after a record-setting victory in the June 2020 Democratic Primary—winning by 16 points. She also made history by becoming the first Muslim woman elected in Georgia. Upon taking office in January 2021, Khadijah filled the post of her mentor, the late Commissioner Emma I. Darnell, who held the seat for nearly 30 years before dying in office in May 2019. Khadijah’s priorities include public safety and criminal justice reform including reducing juvenile delinquency;  senior services and youth programs; environmental justice; public health; economic development and entrepreneurism; and arts and cultural programming. A community leader for years, Khadijah serves on the board of directors of Atlanta Legal Aid Society; is fundraising chairperson at Humanitarian Relief Inc., a faith-based program that feeds homeless and needy persons; is past board member of the Fulton County Council on Aging; and has been a longtime volunteer with the C.T. Martin Youth Fest. ​

Parade Lineup Information and maps
Parade Float Line Up 8:30am
Float Design Time
Parade float line up complete 9:30am
Float Design Time
Parade entry check in 9:30am
Float Design Time
Parade Line up starts10:00am
Car Club Pull up 11:00 am
Parade position check 11:00-11:40 noon
Parade start time 12:00-noon on the dot
Parade distance 1.5 miles
​For the complete walk around Centennial Olympic Park equals 1.5 miles. There are options for walking/marching participants to disband on arrival at Centennial Olympic Park or for those who desire to continue walking/marching along with the parade floats that will continue around Centennial Park and disband back on the entry street. Centennial Olympic Park as illustrated on the map.
PARADE CHECK IN AND LINE UP  LOCATION MAP 2022 ​
Parade line up and check in is located at the intersection of Memorial Drive between Connnally Street SE and King Street.
​(see map)
For parade check in look for the 10 x10 tent on Memorial Drive in between Connally Street and King Street. After checking in, you will be directed to your pre-lineup area.
The line up for parade floats starts at 8:30am. Regular set up starts at 9:30am Parade stars at 12 Noon on the dot. No delays! 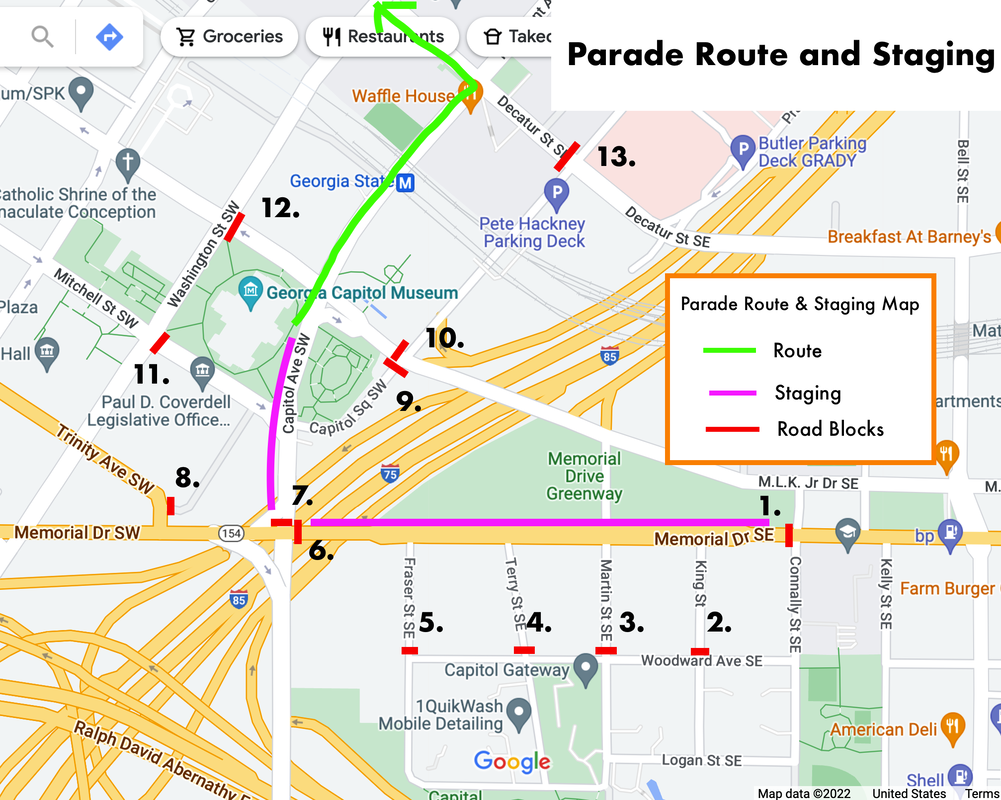 2022 PARADE ROUTE
The parade will start at 228 Capitol Ave SW, at the Liberty plaza, across the street from our state Capitol building. The parade will move up Capitol Ave to Decatur Street and make a left turn onto Decatur Street, Decatur  Street turns into Marietta Street and continues down Marietta Street to Baker Street, Makes a right turn on Baker Street, and makes a right turn on Centennial Olympic Park Drive and concludes at Centennial Olympic Park. SEE MAP! 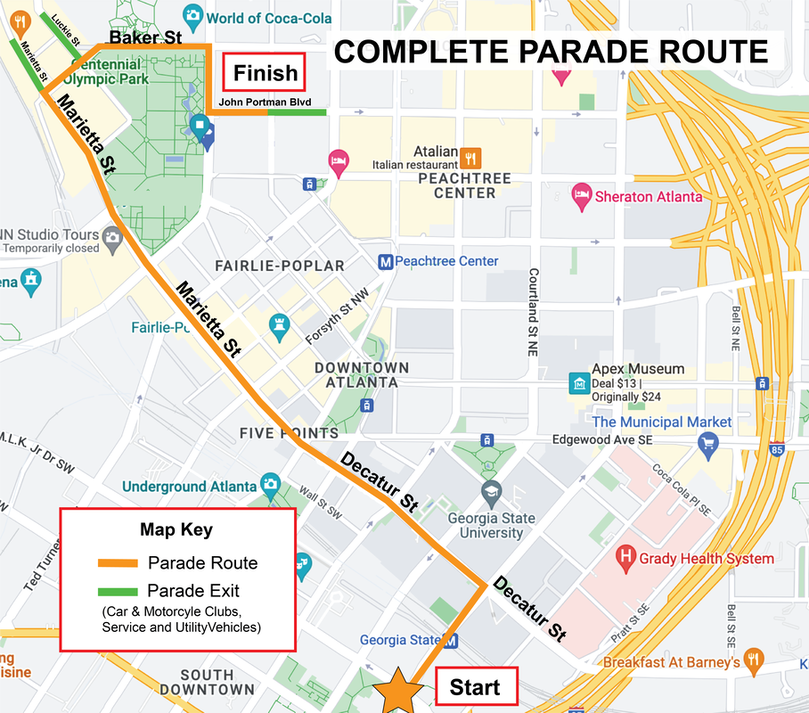 Forget about parking Take Marta, Take Street Car!
PARKING AND TRANSPORTATION
Best plan:
1.Take Marta to the line up location:
2. Get dropped off at the line up position!
3. Vehicles that are not in the parade should not come into the lineup area
If riding with a driver have the driver drop you off and park at parade end area.